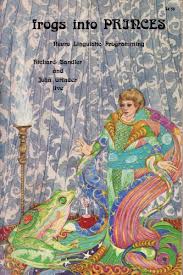 The year was 1990 and Frogs into Princes

was the first and most important book on neuro linguistic programming that I ever read.

Well, I think I read it, I remember getting to the last page, but I had no idea what I had just read. I remember thinking, I just read this book,  but I don’t know what it was about … consciously.

But my subconscious was primed and starting to create change.

I read Frogs into Princes again in early 1995. That was after five years of studying NLP and taking an NLP Training, so it made a lot more sense then.

I reread the book for the third time years later. In some ways, it was just another book about neuro linguistic programming, and yet it was so much more.

Frog Into Princes “THE” NLP Book

Actually, Frogs into Princes could never be just another NLP book, because it’s “The” NLP book written by “The” creators of NLP, Richard Bandler, and John Grinder.

Obviously, there is magic in this book, and it is so far from your reality today that just by reading it, it could put you into a deep trance. I would highly recommend that trance because I’ve been in it for over 28 years.

Everything in this book works as stated and better. I had initially tried to prove the processes and techniques wrong.

I tested and re-tested to see where NLP failed but gave up out of frustration and delight.

You may be like me and use this book as a start to a life long love relationship with NLP, or you may just use it to better yourself in some significant way and move on.

Either way, reading this book will affect you greatly in a wonderful way.

Inside You Will Discover Many Things

It’s John Grinder and Richard Bandler doing a live seminar. You will never get closer than this to the Creators of NLP.

Within the Forward, you will find the boilermaker story, one of my favorites. There are many stories within this book, and the most wonderful thing is, their meaning will depend on you.

And you may notice the story changes the next time you read it, or it may change after you read it. Either way it’s meaning will still be for you at the time.

Also, John Grinder and Richard Bandler issue a challenge to you, the reader, at the start of the book. Will you be astute enough to take it they ask?

This book will change how you think, and how you see and understand the world around you. It will give you a new power and a sense of knowing.

But be careful because it won’t stop there …

5 Reasons To Procrastinate But Beware The Danger!

What is NPL? The Biggest Secret Ever Kept From You!

Do You Want To Know The Most Obvious Way To Gain Confidence And Prove Your Worth?