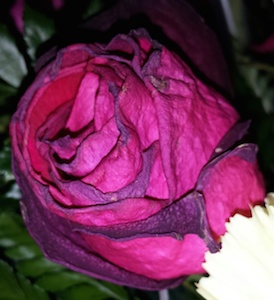 Do you feel like the rose that has never opened?

Then start living an outstanding life, and finally have what those other people have, once you get past this one main obstacle that’s been holding you back.

We’re on a personal Coaching mission to eradicate this obstacle.

You are born with two, the rest … created. Want to know what this obstacle is that’s been holding your life back? It’s Fear!

But it’s no ordinary fear that holds you back. It’s the fear of consequences, and that contains significantly more energy than having an Outstanding Life.

You’re probably more familiar with the term “Fear Of Failure,” but it’s not the fear of failure that scares us the most. No, it’s the fear of the consequences arising from failing that you are most afraid of.

Let me give you an example from everyday life, something many people, perhaps you, have a secret desire to become – A Ballroom Dancer.

Ronda and I take Ballroom Dancing lessons once a week with a group of approximately 50 people. And, once a month we attend a dance in the same neighborhood, matter of fact, just around the corner.

Now, wouldn’t you expect those same 50 people to show up to the dance so they can practice more of what they learned, and have gobs of fun while doing it – Fat Chance!

The same 6 to 10 of us from the dance class show up every time. And some, not saying who, are not that proficient at not stepping on Ronda’s toes – YET!

Why Don’t They Show Up?

I’m sure you’re quick enough on your feet to know the reason now, right?

It’s not that the missing dancers have a fear of – Failing – to be able to dance, they continuously fail over and over every week at the dance lessons. That’s why they are taking dance lessons, so they can – Fail – into becoming good dancers.

Unfortunately, most of us have been conditioned early in life, not to stand out because of this very reason. And certainly not to make a mistake if you do stand out.

This has had such an effect on most people that even Jerry Seinfeld jokes about it, saying that most people who go to a funeral would rather be in the casket than doing the eulogy.

So, if you want to have an outstanding life, it’s time to make some simple changes.

And obviously you don’t have to be an Evel Knievel, pushing your luck dangerously, nor do you have to want to conquer the world to start living an outstanding life. But you shouldn’t be afraid to experience everyday living the way you wish to either.

Want to have an outstanding life – Your Way? Get rid of the fear of consequences.