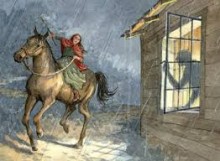 When it comes to being assertive, are you the last in line?

Being assertive is not the same as being aggressive, although it can be seen as such by people who lack being assertive.

The good news is, those people have the least amount of say in your career, other than being annoyingly negative.

And being assertive is not left for the men in the crowd anymore. Now, more than ever, women are elbowing in on the prime real estate of position, in companies big and small.

Women are usually in the majority in Public Speaking Program purchases.

And it’s not that women have just started taking on men in the workplace, no, that’s been going on for a while. But now it’s becoming more well known and more widely publicized.

Take, for instance, the story of Paul Revere, who rode from Boston to Lexington to warn the American revolutionaries that the British were coming; almost everyone has heard that story, right?

I Didn’t Know That!

Well, did you know that two years later a 16-year-old gal by the name of Sybil Ludington set off on a similar mission from what’s now Kent, New York?

Here is a little ditty on the famous, but unknown to most, female Paul Revere.

Listen, my children, and you shall hear
Of a lovely feminine Paul Revere

Who rode an equally famous ride
Through a different part of the countryside,

Where Sybil Ludington’s name recalls
A ride as daring as that of Paul’s.

Was Sybil less known and appreciated because she wasn’t assertive enough? I can’t say for sure, but someone was very assertive in getting Paul’s deed out to the masses.

How? Well, you could start learning NLP, or a quicker step would be going here and grabbing our Fearless Public Speaking course.